Aside from the literal ups and downs of this trail, the emotional highs and lows are staggering. Let me bring you up to date with the recent ongoings of the PCT, as we approach the final leg of our thru hike.
Up: Crater Lake, one of the most scenic gems of the trail and a place that I've been personally excited about visiting, was right around the corner after we left Ashland.
Down: We arrived in Mazama Village in Crater Lake just as they closed the trail because of the nearby fire. Previously the Rim Trail had been open to hikers but the section of trail where it linked up with the PCT was now closed, as well as the nearest roads. This meant we would have to somehow procure a ride (from a complete stranger) out of the National Park and back around to where the trail crosses Hwy 138 by way of a 70+ mile detour. 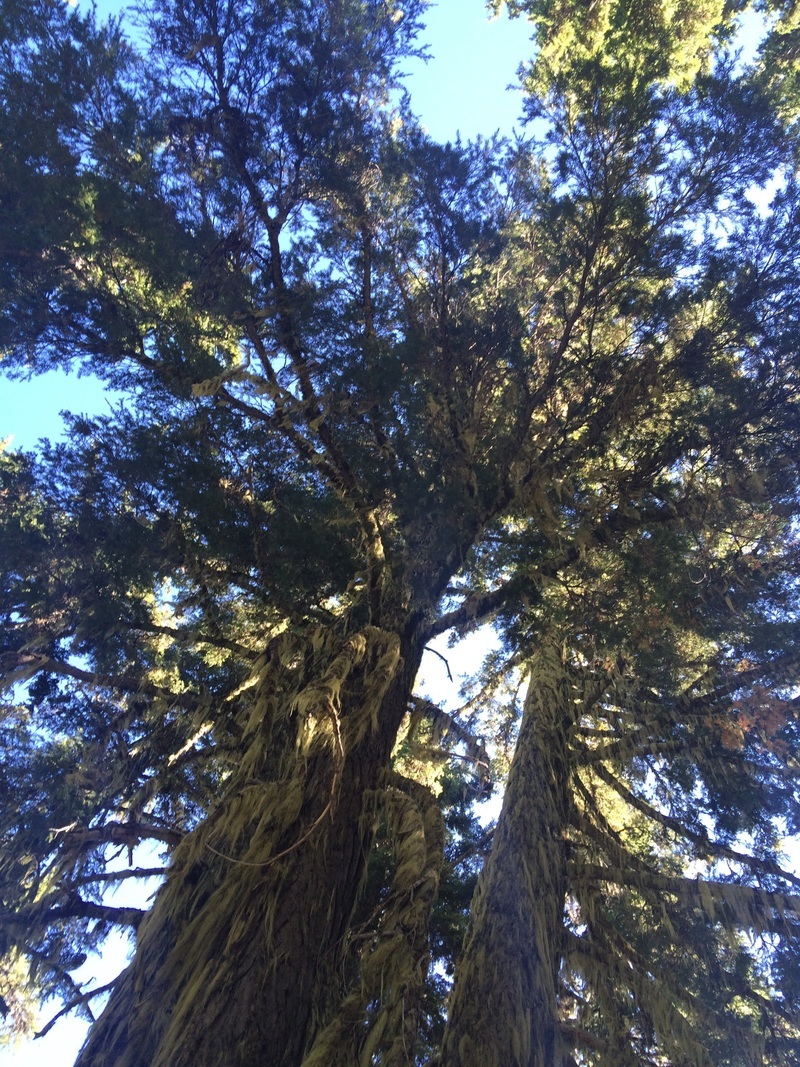 Up: Because of the closure, we got the opportunity to catch up with all of our hiker friends that we had met and lost track of because they had been hiking just days ahead of us for months. The huddled masses were all gathered around the Mazama Village general store in a sea of abandoned backpacks and dissected resupply boxes, sipping on bottomless fountain sodas and heady Oregon craft beers, donning windbreakers while their laundry was being done and swapping insider info about which shower stall was free.
More Ups: Two girls, trail angels from Bend, showed up around 9:30pm the night we had arrived at Crater Lake and offered us a ride back to the trail (remember: this is a 70 mile or so ride) and some fried chicken and pizza. We crammed six people and packs into the back of their truck and hunkered down for the hour and a half ride back to the trail, setting up camp in the smokey wilderness around midnight. 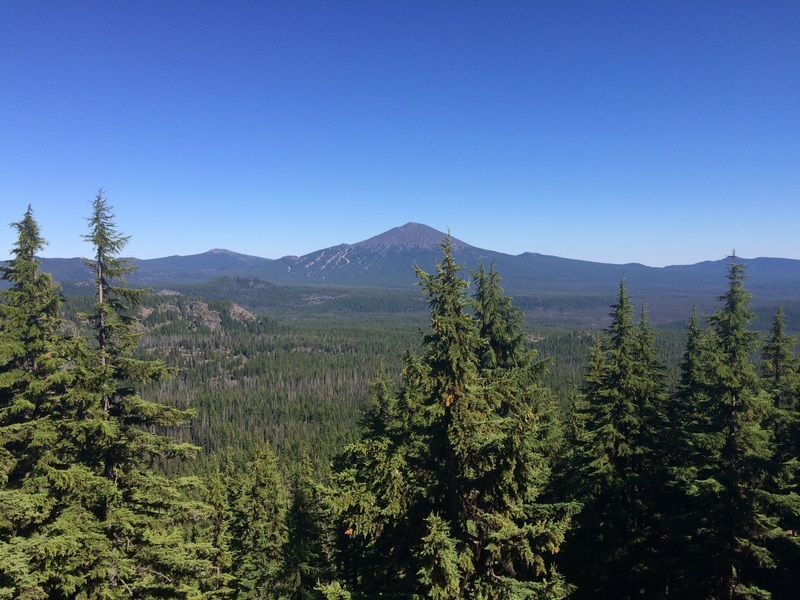 Then we continued to accept a hitch in the morning to Shelter Cove from another trail angel named Steve. We stopped along the way at an awesome little roadside diner for gigantic pancakes served to us by the fly-swatting, toothless owner/cook and her smart ass teenage granddaughter waitress from Reno, who had already managed to perfect the disgruntled and overworked server act.
Once at Shelter Cove, a quaint little vacation/fishing spot on Odell Lake, we rented a charming cabin with some friends and spent the afternoon on a pontoon boat, skinny dipping and cannon balling off the sides of the "Party Barge." Then we spent the evening eating frozen pizza and watching Seinfeld and snuggling on overstuffed leather couches. It was glorious. 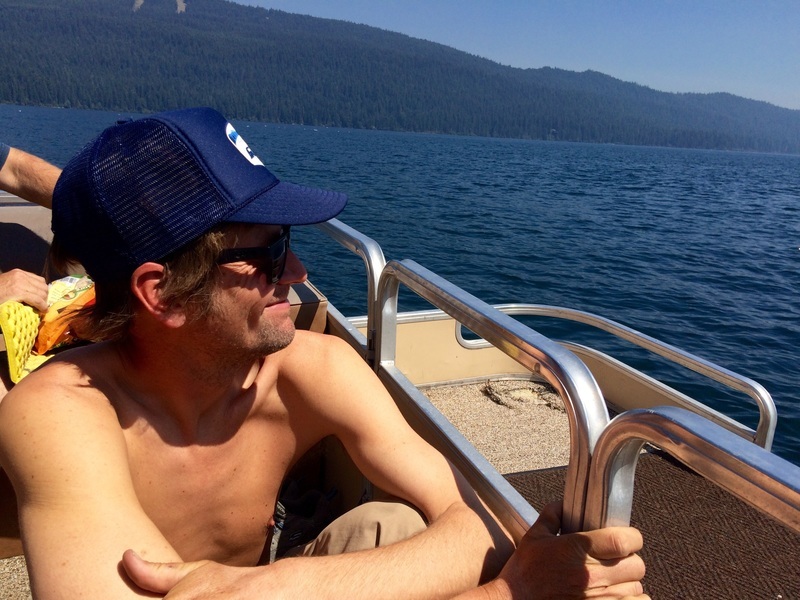 Although we skipped about one hundred miles of trail between Crater Lake and Shelter Cove and were ultimately bummed about not even seeing Crater Lake at all (and missing the "highest point in Oregon" on the trail), we were actually sort of stoked to have jumped ahead a bit. It was a nice mental and emotional boost. Plus, boat stuff was super fun.
The afternoon we hiked out of Shelter Cove, we broke a personal record and swam in FIVE lakes in one day. That was also great. 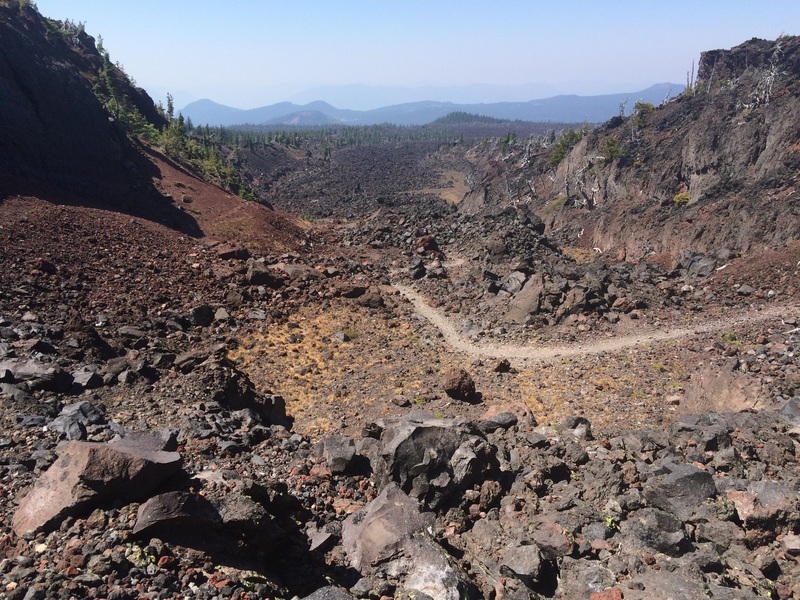 Then the trail took a turn for the better. The dry stretch of Southern Oregon turned into lush forests (still terminally dusty) that opened up into glassy blue lakes every few miles or so. Matted tufts of moss hung stiffly from high branches of the sugar pines, as though the Grinch had recently molted everywhere.
Sisters Wilderness took on a drastic landscape change when the forest opened up into wide meadows as we hiked through the late afternoon shadow of the South Sister mountain. 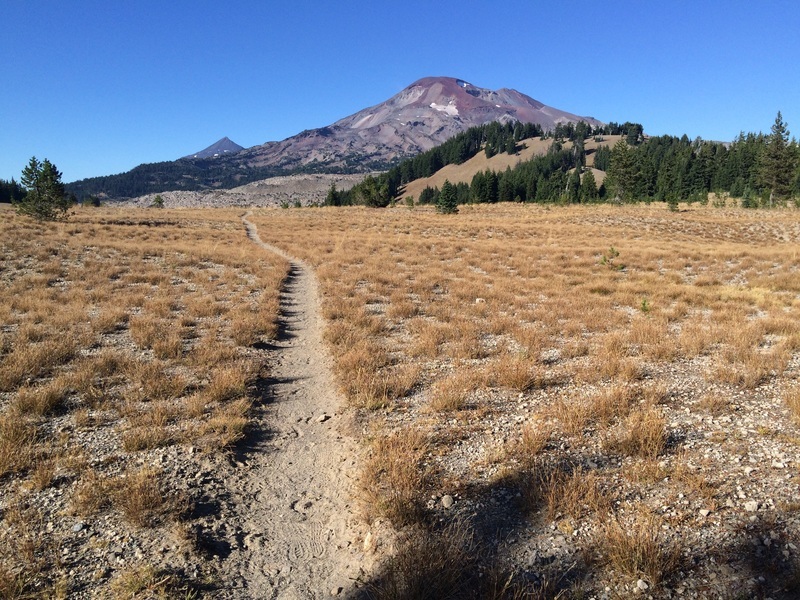 Down: Then everything got ultra volcanic in a hurry as we spent the next day climbing begrudgingly through vast and exposed switchbacks of sharp and blackened pumice stones. It would've been a curious scene if the volcanic rocks had lasted for a mile or two but they carried on all afternoon, much to my dismay. When we finally got to the road to hitch into the town of Sisters, I was pissed at the trail for being so awkward and crumbly. Stupid volcanos. 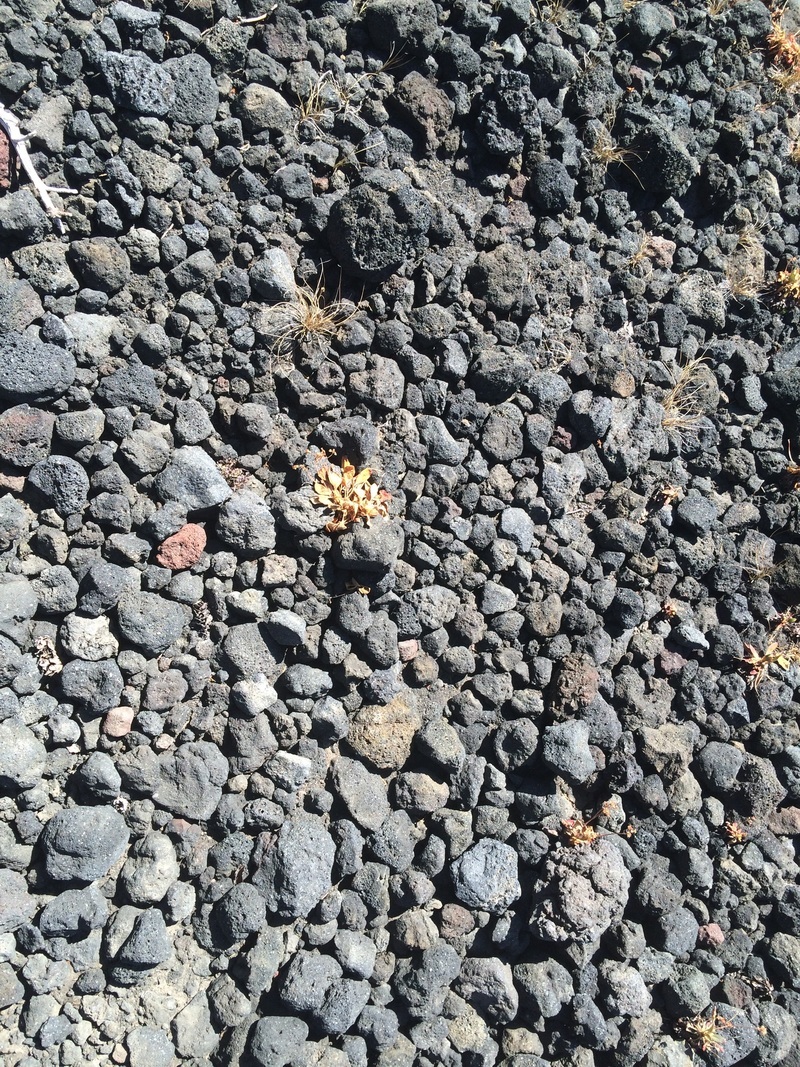 Up: We hitched a ride with another nice woman from Bend and her little three year old nugget who had been out day hiking. Best part: she actually worked at the same bakery in Bend with the other two girls who had given us that outrageously long ride from Crater Lake. Small world.
Down: Major wildfires raging through Washington. As if Oregon wasn't smokey enough from its own fires, the PCT in Washington has been closed for weeks due to fires and things are not looking promising. High winds aren't helping the situation, Obama has declared a State of Emergency and firefighters from Australia and New Zealand have been brought in to assist the Hot Shots who are already working their asses off to contain the blazes. 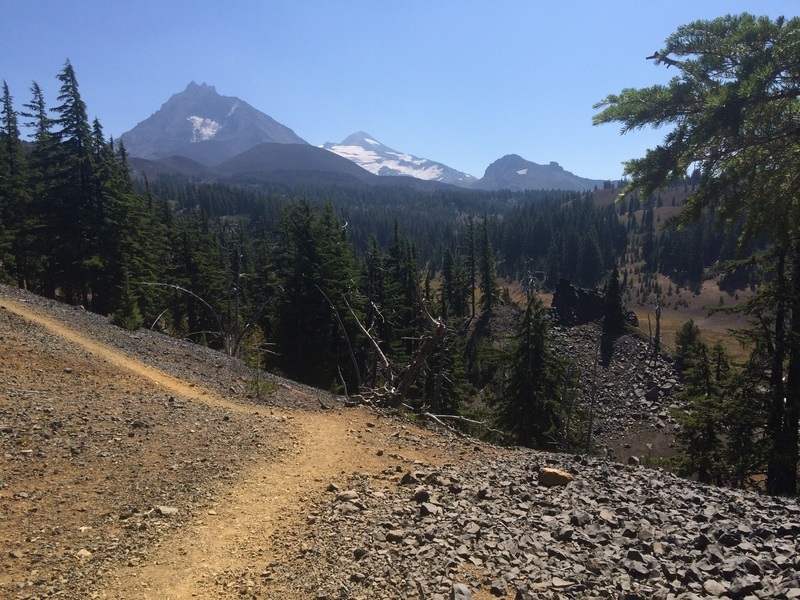 Up: We have a coffee table book at home that lists German words for various human conditions. They're all about twenty letters long and spelled out phonetically so you can attempt to pronounce them. I'm sure that the book contains a word, which I can't seem to come up with in English, whose definition reads: "acting disappointed, but secretly elated." This accurately sums up our feelings about having to probably skip nearly 200 miles of trail in Washington. 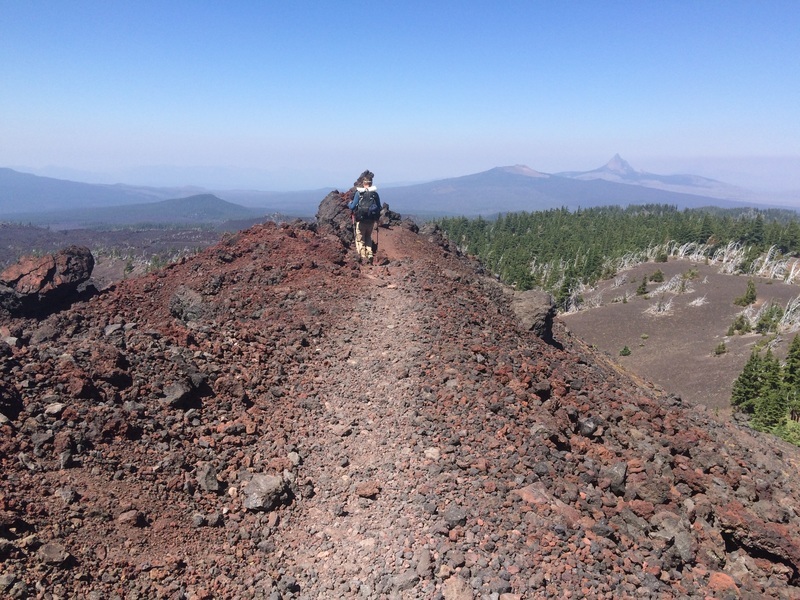 We may have to just turn this thru hike into a road trip from Stevens Pass up to Manning Park and day hike south from Canada to the terminus. One way or another, we are getting to that border. But sometimes enough is enough, and quite frankly, if we are forced to hike a little bit less in the end, well hell.
So that pretty much brings us up to date, as we are lounging here in touristy little Sisters, Oregon. You can't even see the legendary trio of mountains from here because the smoke is so thick, but that can't stop me from enjoying an arugula salad and a bath. Back to the trail tomorrow and up towards Cascade Locks, where we will cross the Bridge of the Gods into Washington. 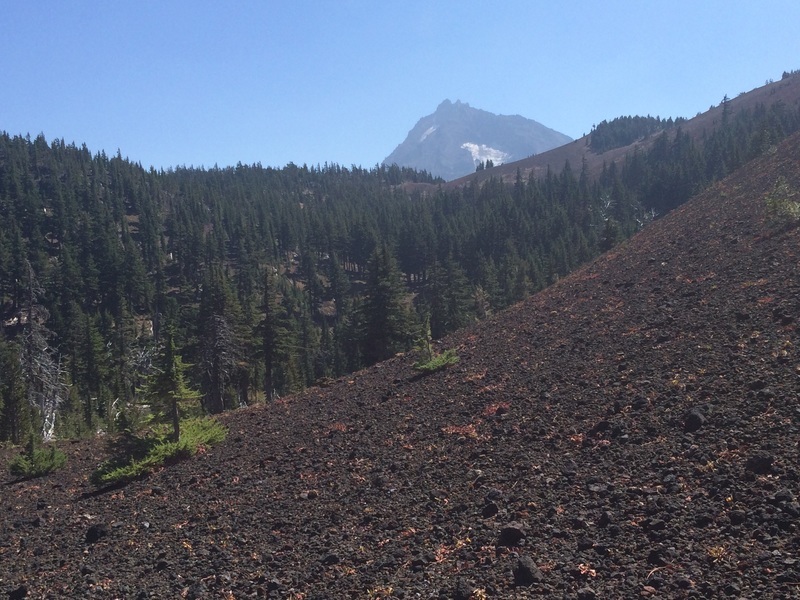 Who knows how far we will get from there, as these historic fires are zero percent contained and there's no rain in the forecast. Towns are being evacuated and homes are being destroyed. In the grand scheme of things, completing our thru hike of the PCT is a pretty small priority in comparison to, well, everything else going on in Washington right now. We plan to hike as far as we can within a safe and reasonable distance from the fires. 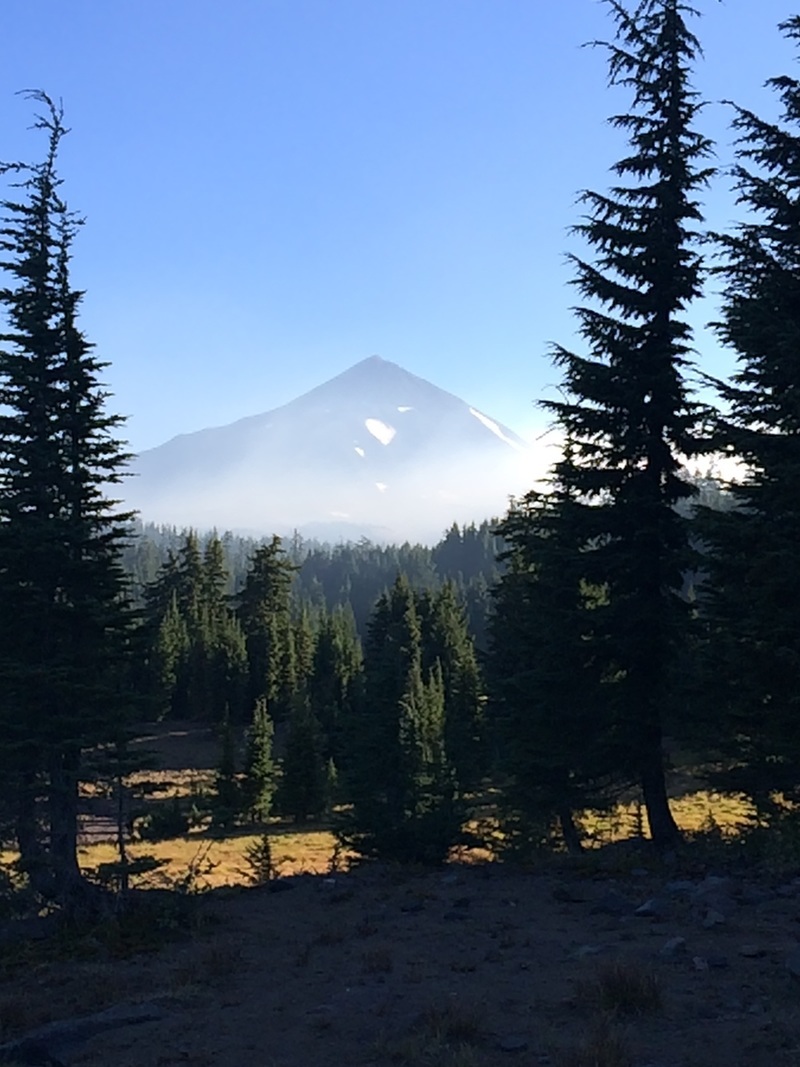 But we will get our damn picture with that terminus somehow. Stay tuned.