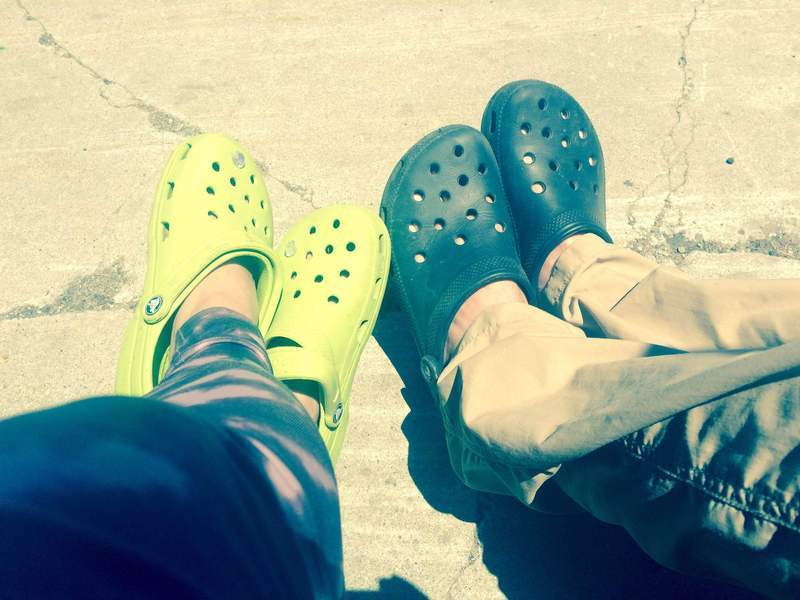 A dear friend once wore a pin that read "you can't make this shit up." That simple phrase has been stuck on repeat as my mantra over the last few weeks. Between the nonstop walking and the snack breaks in outrageously scenic locations and my new found appreciation for picnic tables and restless and aching slumber in our little tent that has managed to hold strong during fierce winds, hail, and below freezing temperatures, there have been a handful of exhausted and frustrating near-melt downs. 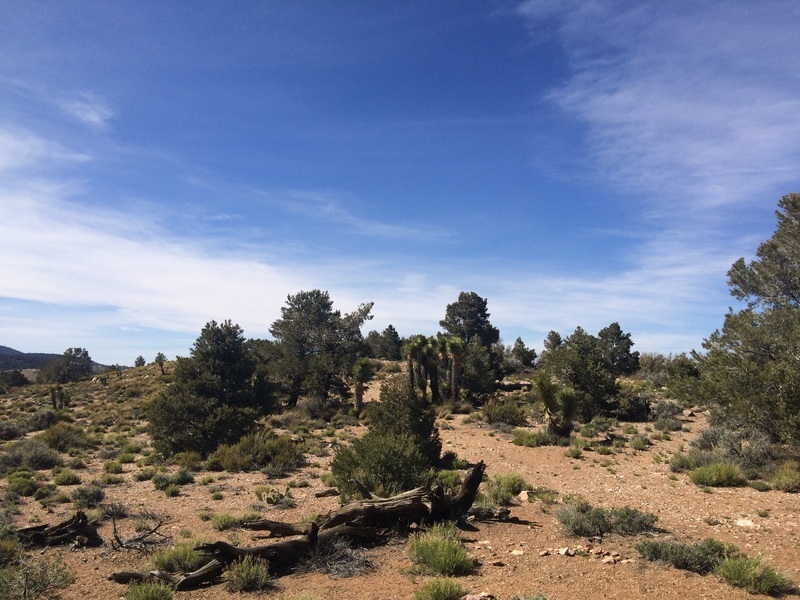 When a case of the cranky sets in- which isn't too often but when it happens it is mighty- something magical seems to kick me in the face. I try not to get too new age-y (ie: #blessed) but when it boils down to it, the universe does provide. 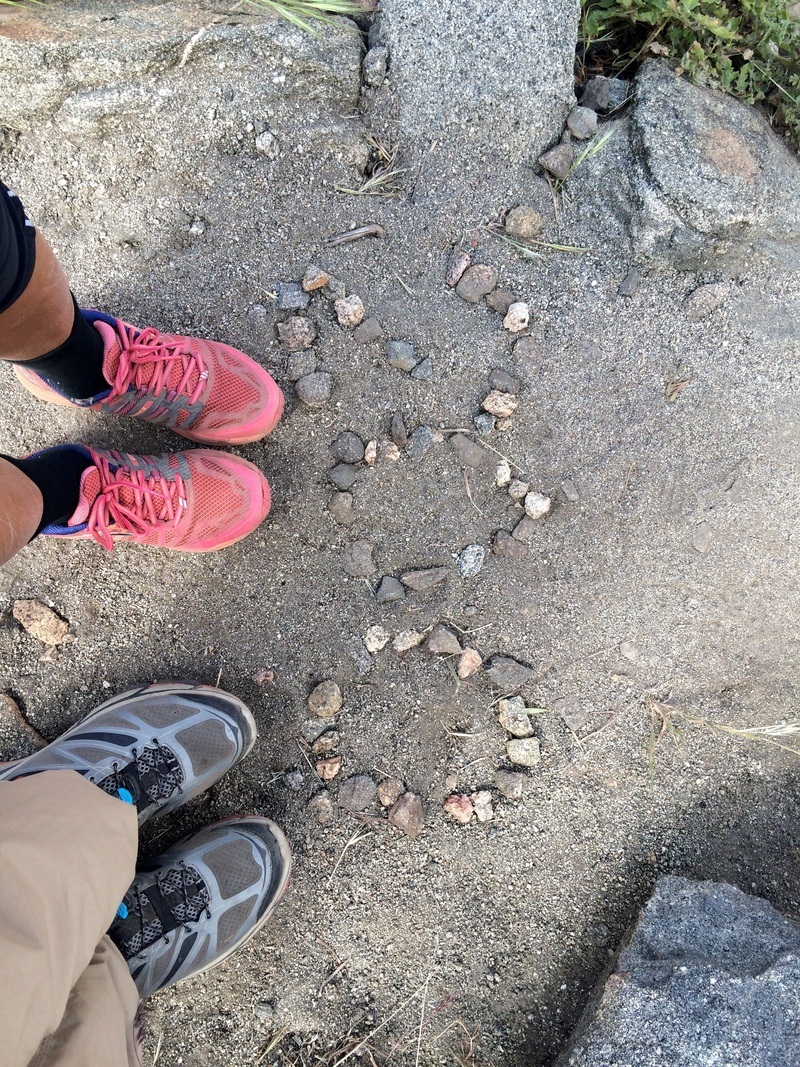 Out here in the great "wilderness" that is the PCT (there are often roads very nearby and a ton of other hikers, despite feeling like you are so very far from civilization so very often), there are "trail angels" who provide "trail magic." These are people who are being nice to people for the very sake of being nice to people. That, in itself, is magic. 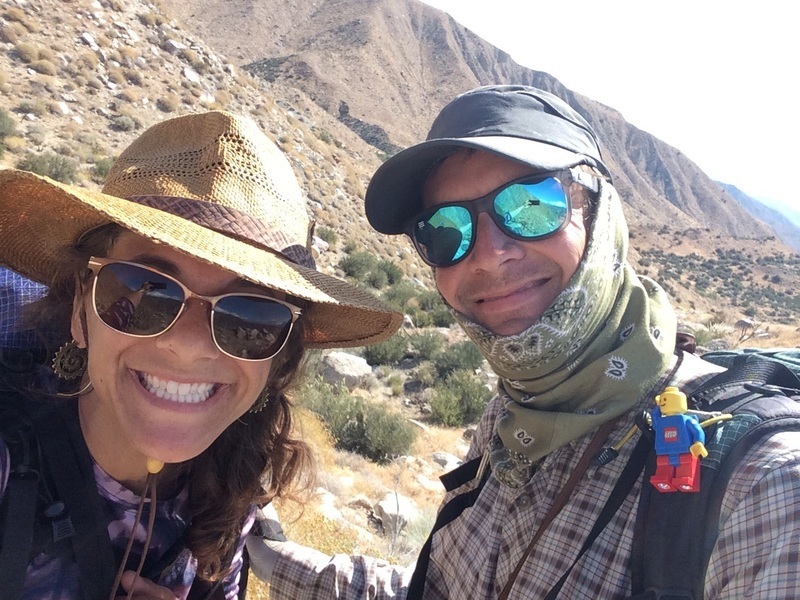 Whether they're former thru hikers or just old hippies who live near the trail and have spare time, a yard that can fit some tents, and/or a big heart, these people provide things that are as simple as water caches to more complex and generous operations that involve donating their homes and property as a haven for smelly hikers to sleep, bathe, do laundry, and rest. 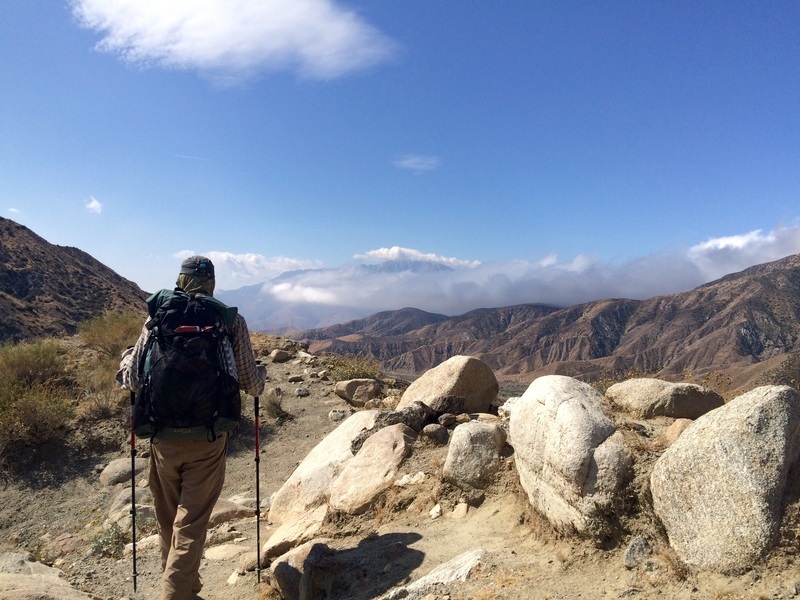 Trail Angels provide rides, meals, coffee, Internet, and a glimmer of joy for the tired masses that careen like northbound zombies through the desert and over mountain passes with nothing but the packs on their backs. Nomadic turtles heading for Canada. Just for fun.
First there was "Mike's house," which we encountered after a hot and grueling day of climbing up and up. Mike was no where to be found, but the groundskeeper, Tom, and his tough looking sweetheart with the purple hair cooked spaghetti dinner (with garlic bread!) for almost 30 hikers who spent the night camping all over the property. Which was in the middle of no where. Literally. No where.
Mystery "Mike" seemed to be a mild hoarder, with his garage piled high with sound equipment, old records, ATVs, BB guns, Radio Flyers, and various collectibles. His backyard was littered with clay-pigeon launchers and bowling pins and other various target practice items peppered with bullet holes. He also had a hammock and a cooler of beer and a hiker box that had a pair of wooden clogs and some Magnum condoms in it that were up for grabs. Andy and I spent the night sleeping in an old RV on the property that was essentially a time capsule, complete with wall paper and an electric can opener and a cabinet full of pristine white visors emblazoned with the 1984 Olympics emblem. 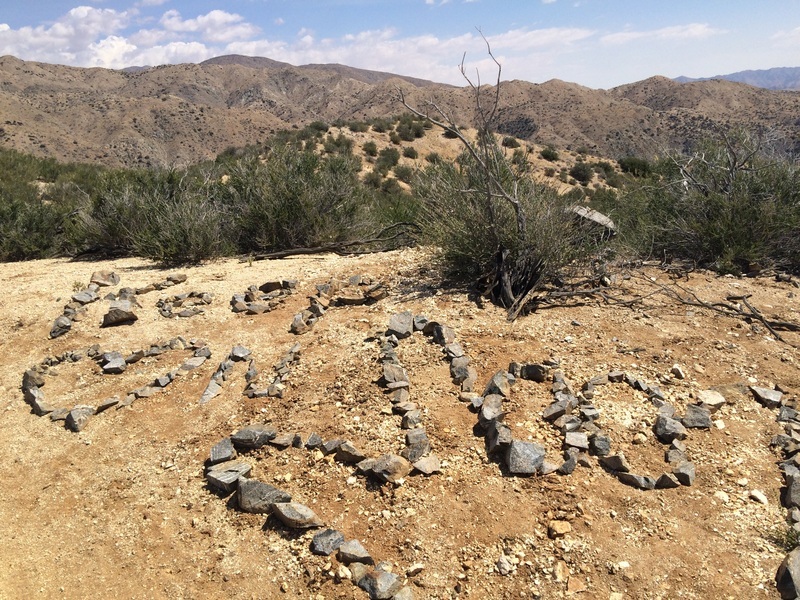 Then there was Ziggy & the Bear's house. Complete opposite of Mike's place. All I wanted was a cup (or pot) of coffee after walking under a busy overpass and along some rusty train tracks beneath some crackling power lines for miles. This sweet old couple had a whole list of rules for their backyard- which was completely carpeted!- which included no foul language. They accept hiker resupply boxes and provide hot showers and hot coffee and sold fruit and candy bars to hikers. You could stop in, spend the night, wash your clothes, and even nap on their outdoor couches. This very organized operation has been helping hikers for about 18 years.
Then, perhaps the most crucial trail magic that has happened to us so far, occurred at the Coon Creek Cabins deep in the San Bernadino Wilderness. We had been hiking for nearly 10 miles at an elevation above 8,000ft through a wet, freezing, windy, hellish cloud. It was bitter and horrible and completely shitty. I was wearing all of my multicolored layers and was still shivering like mad. It was too cold to stop and we were hiking quickly and furiously and all I wanted was to curl up in a ball in the sleeping bag forever but there was no where to do that. Just as I was reaching my breaking point and was on the brink of a fit, there were signs reading "trail magic," which we hastily followed.
There, in the middle of the woods was a massive campfire surrounded by about ten of our fellow thru hiker friends who cheered as we sauntered over. Some people had brought up hot dogs to grill, as well as fresh fruit and veggies and beer and soda. A fire! Literally minutes after I had dramatically whined to Andy that I felt like I was gonna die. A freaking fire. 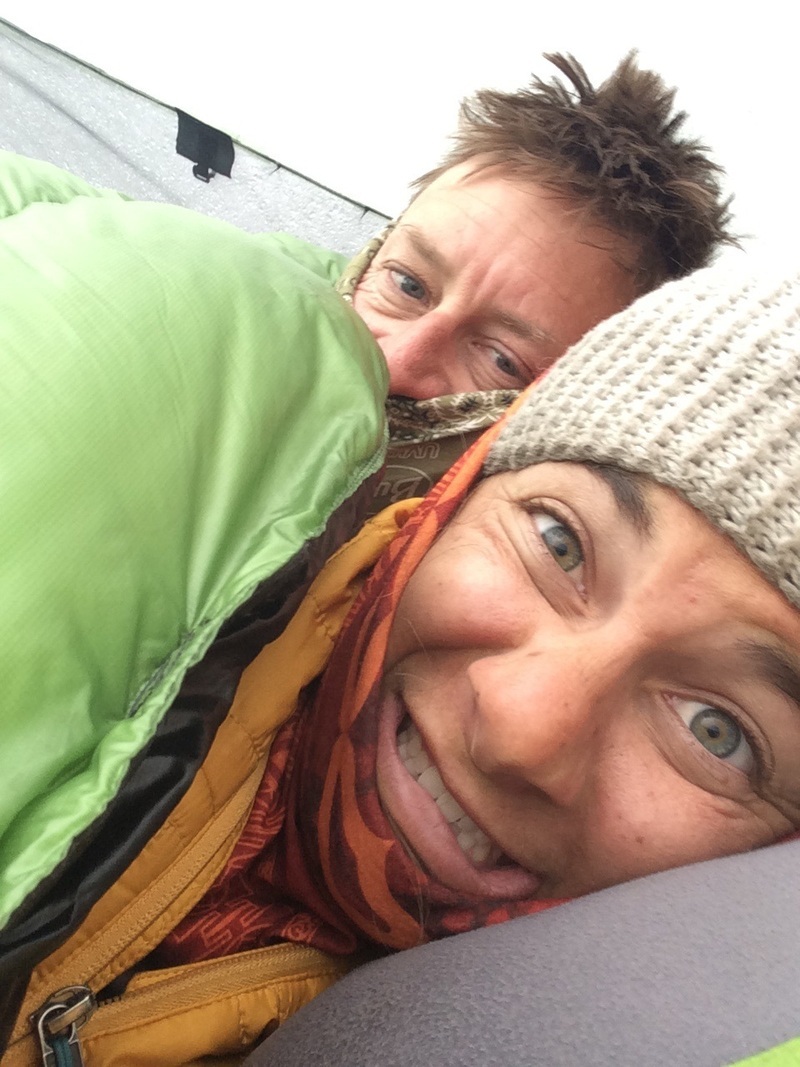 And just like that, everything was okay again. "Peachy ginger," to quote a friend of mine. Sighs of relief all around.
We spent the night hunkered down in our tent just a few miles past that magic scene and waited out the hail storm that ensued. And the next day, the sun came out and all was right with the world.
But this trail magic stuff, wow. 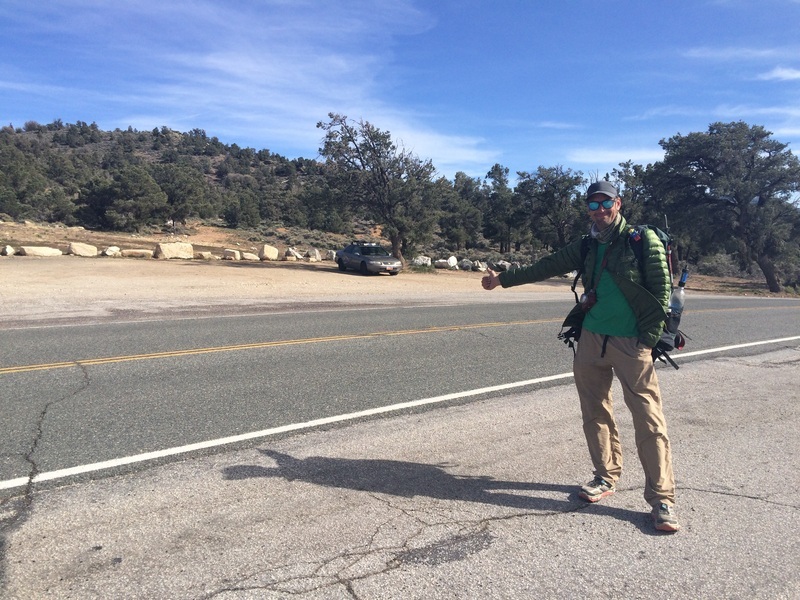 Then the next day some friends of some other thru hikers we had just met let us smash in the back of their "bitchin' Camaro" and gave us a ride from the trail head down to Big Bear Lake, where we've been soaking in our big jacuzzi bathtub ever since.
Moral of the story: be nice for the sake of being nice. The gratitude and appreciation of those on the receiving end is immeasurable. Now excuse me while I go eat some chicken pot pie.
7 days worth of food:
3 packs of jerky
2 bags chili cheese Fritos
2 bars of sea salt/coffee chocolate bars
1 jar peanut butter
Salted almonds/cashews
1 box stove top stuffing
2 packs Idahoan mashed po
1 bag craisons
1 pack of bear claws
3 apples
1 avacado
3 boxes nature valley bars
2 boxes chocolate fudge pop tarts
1 bag bbq kettle chips
1 bag goldfish
1 bottle ibuprofen
1 travel sized toothpaste
1 bag wasabi peas
6 fruit leathers
Some string cheese
(Not pictured: 5 clif bars, 3 backpackers pantry meals ((pasta veg parm, Hawaii style chicken w rice & Kathmandu curry))... Nom nom nom) 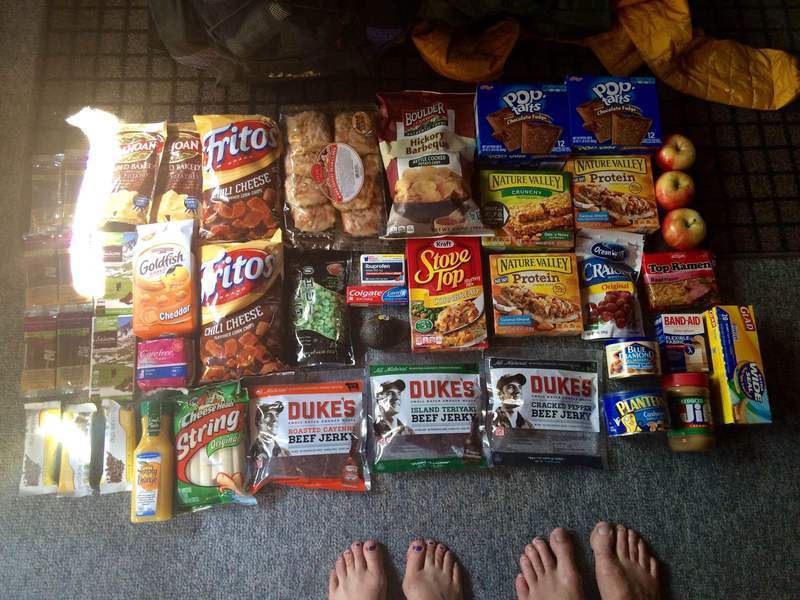 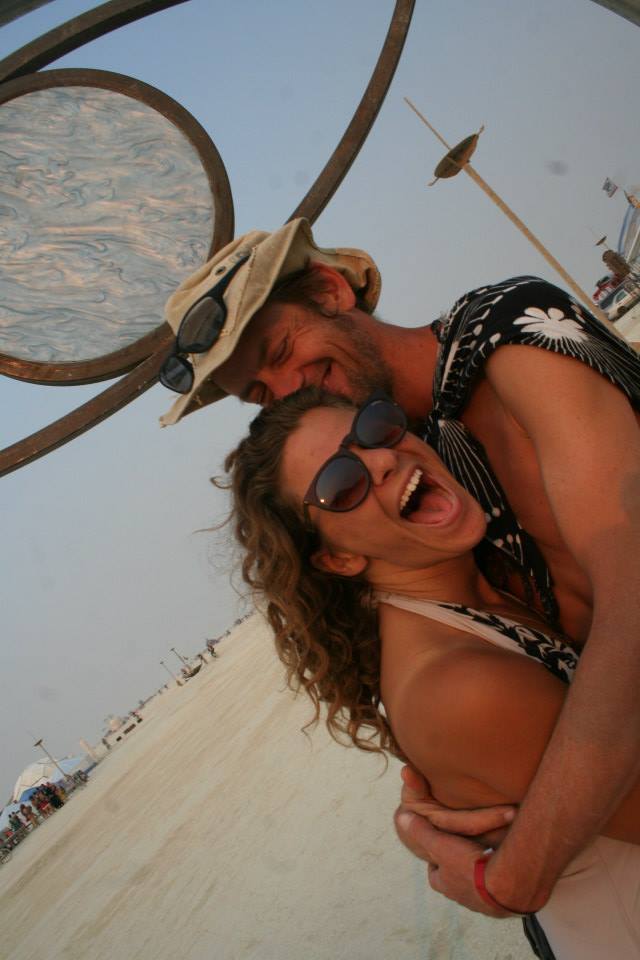 Like my dad says, there are roads that go all the way from Mexico to Canada. However, I doubt they are as scenic as the Pacific Crest Trail. The PCT passes through twenty five national forests and seven national parks. It meanders through the Laguna, Santa Rosa, San Jacinto, San Bernardino, San Gabriel, Liebre, Tehachapi, Sierra Nevada, and Klamath ranges in California, and the Cascade Range in California, Oregon, and Washington. The highest point on the PCT is Forester Pass at 13,153 feet. We will walk over that. Mount Whitney, the highest summit in the contiguous United States, has an elevation of 14,505 feet and is located in the Sierra Nevada range... and we're probably gonna climb that too.

It will take us roughly five months to hike the entire thing, beginning near the border town of Campo, CA and ending in Manning Park in British Columbia. We will begin hiking on April 7 and arrive in Canada sometime in September.

No, we won't be carrying a gun. Yes, we'll have (small) knives. No, we're not bringing any toilet paper. Yes, we will be hiking the trail "alone," as in "just the two of us"... and all of the other hundreds of people who attempt to thru hike it each year. Plus all the various short distance and day hikers who occupy the more popular stretches of the trail, such as the John Muir Trail.

Yes, we will carry all of our own food and water. Yes, our feet will hurt. We will be hiking about twenty miles each day. Yes, that is a lot of miles to hike in a day.

Yes, we will miss our comfy queen bed and our hammock in the backyard. And the bidet and the SodaStream. And Jazz Fest and Burning Man. And especially those bacon-wrapped dates from Linger. 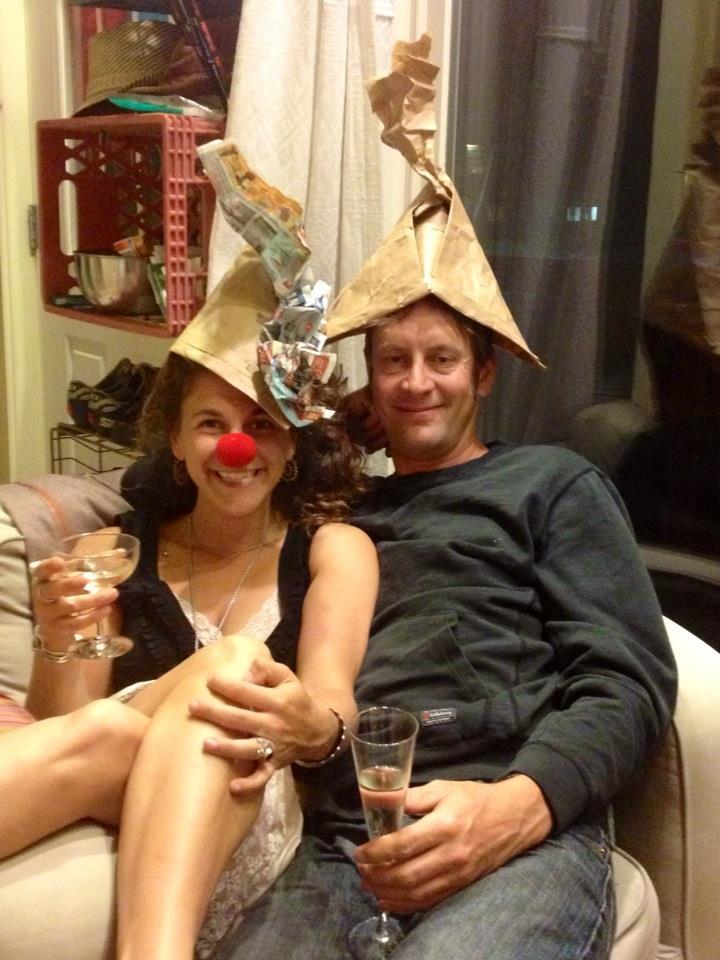 We will attempt to update The Great Dilly Dally on a somewhat regular basis, as we will pass through towns every 5-10 days. During those town stops, we will resupply our food and gorge ourselves on cheeseburgers and take really long showers in really modest hotel rooms. We will also include information about our upcoming town stops, including the addresses of the local post offices incase you want to send us treats and treasures.

What will we eat? A lot of beef jerky and Snickers bars. Dehydrated food and nuts and peanut butter.

No, we're not wearing hiking boots. I'll be sporting a pair of hideous electric-salmon colored Brooks Cascadias and Andy will be wearing a pair of Hoka One Ones. Oh, and Injinji toe socks. Yes, toe socks. Andy insists they are very effective at preventing blisters. We will see about that.

Our packs will be quite light, weighing about ten pounds without food and water.

No, I've never done anything entirely like this before. Yes, there was that one time that I trekked the Annapurna Circuit in Nepal but I didn't carry my own stuff and slept in tea houses and ate hot dinners that were prepared for me each night. I did hike over Thorong La Pass (17,769 ft), which was completely insane. But that trek only lasted about three weeks.

Andy hiked the first 900 miles of the PCT in 2009, so he is well versed at the more technical stuff, know-how and planning. He's read the reviews, acquired the gear, printed the maps, activated the GPS Spot Device, applied for the permits and even set up this blog. 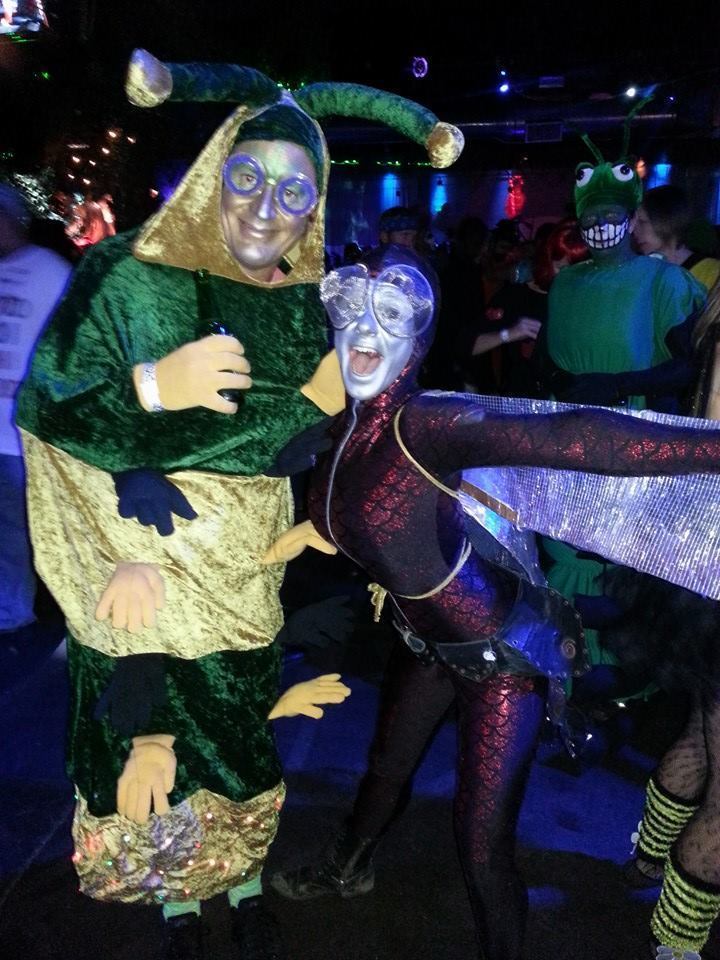 All that's left to do now is walk the walk.

Yes, we will probably be very smelly people during this excursion. And quite hairy, at that. Time lapse photos to come (and probably some really good looking scenic stuff, too).

Yes, we are crazy people. And we are embarking on The Great Dilly Dally, otherwise known as thru hiking the Pacific Crest Trail.

Hopefully this has answered some of your queries and curiosities. Questions, comments, concerns? Dirty jokes? Witty banter? Leave comments below.